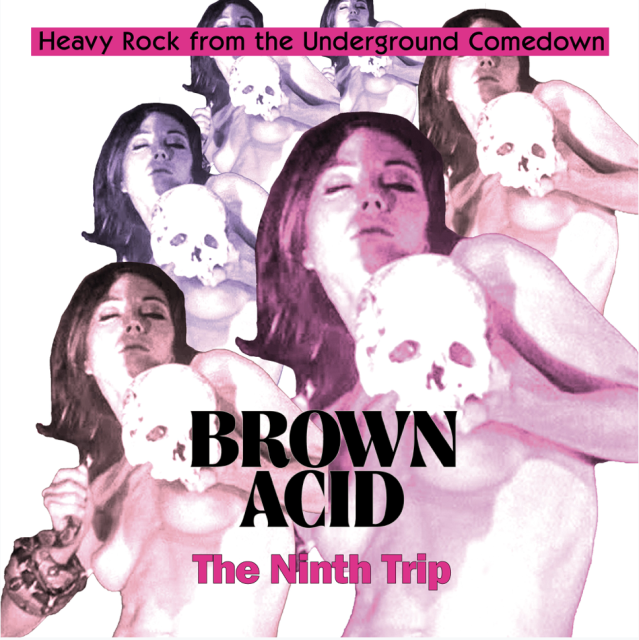 Number 9. Number 9? Number 9! Brown Acid is back, right on time, with a fresh batch of the dankest hard rock, heavy psych, and proto-metal bangers you’ve never heard before. As usual, all of these tracks were licensed legitimately and the artists were paid. It ain’t easy, but it’s the right thing to do! And although the quantity keeps rising, our quality control hasn’t suffered. You won’t find even one throwaway track here, or on any volume, just pure unadulterated heaviness from the after-Altamont era. This Trip is All-American, and in addition to the eight 45 sourced jams and one hard rock holy grail LP track, it includes a previously unheard song by a completely unknown band that’ll melt your mind. So crack a cold one, crank the volume knob, and let the Brown Acid seep into your skull yet again.

Garage turkeys have long been familiar with the Minnesota-based group The Litter, who have some very collectible 45s and LPs, but the related band, White Lightning, isn’t nearly as well-known. White Lightning released only one single and one LP (under the name Lightning), but they had far more recordings than they released, and “Prelude To Opus IV” is just one of the band's many outstanding unreleased tracks. White Lightning took the chops the ex-members developed in The Litter and kicked it up a notch in the heaviness department. They were risk-takers and innovators and were the first Power Trio and first to play through Marshall full-stacks in the Upper Midwest. Their guitarist was the first to play a Flying V in the region. They also happened to be named after LSD. Brown Acid material all the way!

Jon Uzonyi’s Peacepipe released one single in 1969 on the eclectic California-based Accent label, and it’s one of the most scarce Brown Acid inclusions. It’s crunchy as hell from the get-go, and the psychedelic touches only add to its allure. Lyrically, it’ll empty your half-full cup in a heartbeat, and the thunderous drums and gigantic guitar riffs will make you want to refill your glass immediately… with the hard stuff.

In 1975, Tom Stevens and the rest of Magi went into Uncle Dirty’s Sound Machine in Kalamazoo, Michigan and recorded nine tracks. Just 1000 copies of the LP were pressed, and its title and lead-off track is “Win Or Lose” from their self-released 45. The long-player has been bootlegged at least twice, but until now, Magi’s recordings have never been legitimately reissued. This revved-up, rural proto-punk cut has enough snarl to start a fight, but the vibe leaves you with the impression that the brawlers will bond over beers no matter who comes out on top!

“The Rise of Flood” by the New York group, Flood, is one of the best LPs released in 1970. Its extreme rarity is the only logical explanation for its ridiculous underrated-ness. Before Flood, the same group released a 45 under the, obviously radical name, Fiberglass Vegetables. The laid-back heaviness on this rural banger will hook ya immediately. The B-side is a non-LP track which you’ll be hearing on a future Trip if you choose to stay turned on and tuned in!

Sid Bradley is Erik. Erik is Sid Bradley. And he self-released this 45 on his own Eden imprint back in ’73. “Rebel Woman” is an up-tempo banger that resides where hard rock and prog overlap. The composition, performance, and recording quality is exceptional. It probably sounds like a magnum opus compared to some of the other stuff we’ve included in this series, but it still fits. By the way, Sid is still writing and recording music, which is not surprising considering how accomplished he is. His recent releases can very easily be found online.

Stonewall’s story is one of the most tragic in rock history. These guys should have been huge, and to say that they were robbed, is the understatement of the century. A very different story of rock stardom could have been told if it weren’t for egregious mismanagement, and a loophole in the law at the time that allowed labels to blindly rip off bands in order to minimize their tax liability. However, like a phoenix from the ashes, the Stonewall record survived over 40 years of neglect, and it now holds its place in rock history as one of the greatest records that almost never saw the light of day. “Outer Spaced” is just one of the eight tracks that we could have included on here from their sole LP, which was recorded in 1972, and “released” on Tiger Lily in 1976. In 2019, Permanent Records legitimately issued it for the first time EVER on vinyl and digitally.

The Zukus 45 has been in the collection for quite some time, and for that amount of time, we’ve been “looking high, looking low” to track down the members of the band. If Zukus were a snake, they would’ve bit us! Right under our noses, Zukus had an online presence unlike any other band we’ve worked with before, but, under a different name: Ice, which is the preferred moniker of Jim Lee’s group. “For some reason,” they used the name Zukus (pronounced zuck-us) for their sole 45 on Toya Records back in 1972. Pack this organ-driven, break-beat-laden banger in your pipe and smoke it!

Space Rock was comprised of a group of Macedonian immigrants living in Detroit, Michigan, none of whom spoke English. At one time, the vocalist, George Bisinov, even won first place in a Macedonian music festival in Detroit! Despite the language barrier, they rocked like red-blooded Americans and both sides of their 45 are top notch. The A-side “Dark Days” is a dirgier affair, whereas “Going Down The Road” locks into a speedy riff fairly quickly after the bizarro circus intro, and it never lets up. According to George, Space Rock recorded numerous other original songs, but they’ve been lost to tape deterioration. If only we could have saved them!

On the phone, Jim Fulton of Buckshot is a very soft-spoken, polite, and humble Texan. Hard to believe considering how macho his delivery is on “Bar Star”! This track is generally cocky in the best possible way. Dual lead guitars take center stage on this shreddy groover and, at just over two minutes in length, it’s a wham-bam-thank-you-ma’am jam if there ever was one. Hamilton St. Records out of Houston supposedly released this back in 1976, but based on how rare it is, it’s hard to believe it was ever released at all.

Brown Acid can be found in some of the least likely places, as long as you can pay close attention. One iota of distraction could’ve caused 29.9 to have remained in obscurity for another 50 years! This band came into our lives while watching the cult horror film Effects. The film is entertaining to say the least, but the star for us is a very short clip of background music in a scene where one of the characters is looking through a stack of bondage polaroids. As the photos are being flipped through, a boombox blasts a Pentagram-esque hard rocker that caught our attention immediately. We tracked down the director of the film, John Harrison. Turns out the song in Effects was by a band John played in with his brother, Doug, and a couple of other guys in the late-60s. They called themselves 29.9, and they recorded “Paradiddle Blues” and a few other tracks, but never released any of them, until now.

Thank YOU for supporting the Brown Acid series. The Tenth Trip is just around the bend. Until then…