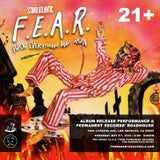 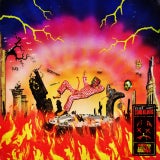 PRE-ORDER the new Stand Atlantic album to get FREE TICKETS to an intimate outdoor HAPPY HOUR performance with the band on the patio at Permanent Records' Roadhouse! See flyer for details.

Australian four-piece, Stand Atlantic are touring in the US and are kicking off release week for their third album, "f.e.a.r.," with a bang! The band isn't pulling any punches with the most diverse, aggressive, and emotional album of their career. With features from nothing, nowhere. and Royal & The Serpent, Stand Atlantic is setting a new standard for the new wave of pop punk. Their hit single "deathwish ft. nothing, nowhere. that has been on heavy rotation at triple J and has held a coveted spot on Spotify's Rock This, since April 2021. From being featured on the cover of Rock Sound, supporting Set It Off on a nationwide tour in January 2022 and heading into their biggest venues to date, Stand Atlantic is set to make this their biggest year yet!