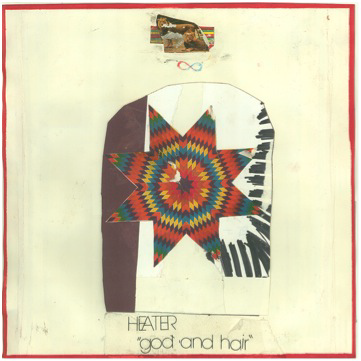 Heater is a three-piece Columbia, Missouri super group, if such a thing exists. Heater's guitarist and lead singer, Zach "Zz" McLuckie, used to be a member of CAVE and Sneakers (both have released records on Permanent Records), among others. Heater's bassist / second guitarist, Jeremy "Jerusalem" Freeze also plays guitar in Jerusalem and the Starbaskets and both he and Heater's drummer, Jon "Wujj" Wujick, formerly jammed together in California Raisins (their only release was a split 10" with CAVE also on Permanent).

Now that you have the band history, we might as well get into the sounds confined within, Heater's first widely distributed release. "God and Hair" is a super upbeat, melodic pop record in essence, but as I mentioned before, these guys come from a very DIY background. It's got some fast repetitive lo-fi punk rock jams with reverb enhanced vocals similar to those found on the Sneakers "Children Into People" EP, and some Clean-esque pop elements, but it's also got tracks with a great laid back summertime '90s alt-pop vibe not too dissimilar from the least noisy '90s moments of Sonic Youth and Sebadoh. All of these elements come together and make for a unique sound (thanks to a little help by Cooper Crain of CAVE's analog production techniques) and make for one hell of a summertime DIY pop jammer. Here comes the summer (of pop)!

There are only 500 copies of this limited edition LP and it may never be pressed again.