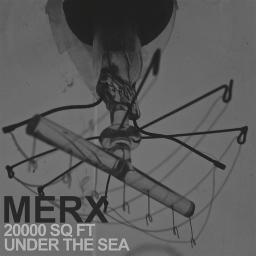 "Second release from this LA band, originally a Skrot Up cassette but now a spin down slab of vinyl thanks to this Permanent press. If you like mad intoning renegade preacher/vocalists, even if you never stumbled across Suicide before, this album is for you. On first listen, I was smitten. And that first track, with deep voice wordless and reverbed into wanton rant. Hell, yeah! Side 1 songs come and go like sitting at a busy intersection during rush hour and watching for weirdos go by in cars. These songs feel like they are chrome-plated with tinted windows so you can’t quite see what’s inside them. Maybe a body, maybe a couple of tanks of oxygen, or is it a toxic chemical? Like those car occupants, the 8 songs on side 1 are gone but leave an indelible impression. Drum machine makes you want to dance, but the baritone madman vocalist is staring at you so you better not move. Little rifflets of guitar that could have an ocean of spy surf behind them. Rev’d up synths idle wildly. After my second listen, I felt like I was in a dingy bar with only bouncers, and each bouncer is trying to throw another bouncer out. The flip side is a single track at 45 RPM PLEASE NOTE. It’s kind of a chaotic free form take of the tighter vibe from the songs on the flip (indeed lyrics from 20 Sq Ft get howled into the fray). Kind of a lunatic jam with that poet/prophet/pervert shouting in the storm. Really digging this release. A rare burly form of synth rock!" (Thurston Hunger, KFJC 89.7 FM, 12/12/2013)

[cassette version on Skrot Up]
"I thought I read somewhere that Merx is an offshoot of some sort stemming from the German Army family tree, which would be awesome. No matter: Twenty Sq Ft stands on its own at the summit of randomness, flitting from disguise to disguise until they barely recognize who’s staring back at them in the mirror. They can be muscular and threatening or, as “Swim Job” attests, quite funky, or at least as funky as a limited-run tape band can be. I suppose gloomy post-punk would have to be brought up in the conversation if you were trying to describe this cassette to a dipshit, but umbrella terms aren’t going to protect you from the unrestrained, infectious enthusiasm pouring from the pores of these sketchy tunes. Let them do their work and Merx will reward you in a perplexing manner. Which reminds me: Do you have the proper documentation to be listening to Twenty Sq Ft? Write Skrot Up to secure the appropriate paperwork." (Grant 'Gumshoe' Purdum, Tiny Mix Tapes, 10/28/2013)