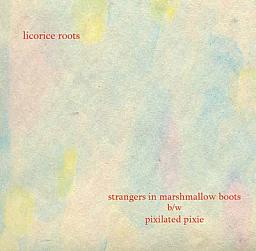 SKU: P-80575
$5.99
$5.99
Unavailable
per item
"The sleeve and titles send up some dull red flags, but don’t be fooled, it’s not some ‘90s pabulum rehash. It’s a real band FROM the ‘90s! In fact, Delaware’s Licorice Roots are former Shimmy Disc recording artists, and recipient of Sassy Magazine’s “Cute Band Alert” in 1993 (seriously). They’ve kept a capital ‘L’ low profile, quietly releasing 4 albums over almost 20 years. “Strangers,” the single and lead song from the band’s last full length, could be a warbling, lost Morricone score from a Sergio Leone samurai western (eastern western?), transferred from ancient unearthed reels and run through a cheapo fuzz. Synth strings swell and embellish the lead melody just right – they’ve clearly had time to develop their sound – and everything sounds old, warm, and very familiar. “Pixilated Pixie” should satisfy any Kurt Vile fans looking for more Violators material. Another warm mellow cyclical jam of fuzzed up guitar wailing, this time with a single vocal line repeated over a cooing synth organ. This is fantastic, all heart. Do yourself a favor and find a copy." - Still Single

"What if, instead of splitting off to form Neutral Milk Hotel, the Olivia Tremor Control, and the Apples in Stereo, the original core members of the Elephant 6 collective had formed one band that incorporated Jeff Mangum's scratchy lo-fi folk, Will Cullen Hart and Bill Doss' trippy experimental tendencies, and Robert Schneider's knack for clever pop hooks? The results would have sounded very much like the Delaware psych-pop trio the Licorice Roots. In fact, the Licorice Roots pre-date the recording careers of all three of those bands, but the band's low profile, coupled with wide gaps between releases, has made them hidden treasure for all but the most devoted fans of modern psychedelia.

But before the Licorice Roots, there was Raymond Listen. Singer/songwriter and guitarist Edward Moyse and drummer David Milsom formed Raymond Listen in the college town of Newark, DE, in 1990. By 1992, organist and percussionist Dave Silverman completed the group, and in 1993 they scored the coveted Cute Band Alert blurb from the post-feminist teen magazine Sassy. Raymond Listen's debut album, Licorice Root Orchestra, was produced by New Jersey noise pop maven Kramer and released on his Shimmy-Disc label that same year. The band added a second guitarist and percussionist for a national tour in early 1994, but split up shortly thereafter. However, only a few months later, the core trio of Moyse, Silverman, and Milsom regrouped as the Licorice Roots. Their first album under the new name took three years to complete before being released as Melodeon in 1997. A second album, Caves of the Sun, was self-released in 2003. In 2006, the Licorice Roots signed with the Chicago-based indie Essay Records and released their third album, Shades of Streamers. At the same time, Essay reissued Licorice Root Orchestra in an expanded and remastered edition under the Licorice Roots name." - allmusic.com