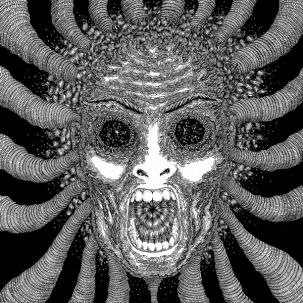 You know who rules? Ty Segall fucking rules. This record - the second of three Ty Segall albums in 2012, had us salivating before we could even get it outta the box. Seriously. We had to squeegee the box. Ty recorded this album with his current hot-shit live band which features longtime drummer Emily Rose-Epstein, and two Moonhearts; Charlie Mootheart and Mr. Mikal Cronin. Anyone whose seen these guys and gal live lately can attest - it's a sweaty, manic, fuzz-filled attack on the senses and this record is the closest and best representation to date of what these cats can bring in a live setting. Released on the infallible In The Red Records, here's what Larry's got to say for himself:

"In The Red is happy as a pig in shit to announce the debut release by the Ty Segall Band. The Ty Segall Band is Ty Segall (obviously), Mikal Cronin, Charlie Moonheart and Emily Rose Epstein. While Segall has released many incredible solo releases, Slaughterhouse marks the first that he recorded with his touring band.

For this mini-album (it’s only ten inches, but you get two!) the band recorded with Chris Woodhouse at the Hangar, turned their amps all the way up, set their fuzz pedals on obliterate and commenced to kick ass and take names. Seriously, this record will melt your face. All of Segall’s usual psych-pop sensibilities are present but Slaughterhouse adds the full-throttle, go-for-the-throat bombast that the band delivers in the live setting. The fuzz riffs, bratty howl and Cro-Magnon bashing culminate with a feedback freakout that’s clearly the only sensible way to end a workout of this magnitude."

Fuckin' WOODHOUSE recorded this dudes. That man has been responsible for recording to tape some of the gnarliest sounds coming out of the Bay Area (Thee Oh Sees, Intelligence, Mayyors to name a few) and we can't think of anyone better to capture the energy of the Ty Segall Band. We're talking far-out, fuzz-faced riff rock; the brutal attack of Mudhoney, Hawkwind, Chrome, Groundhogs and Sabbath mixed in with soulful dash of Bo Diddley or Beefheart. It's (mostly) a set of all-new originals Ty and the band wrote together, along with a re-worked, amped up version of Segall's "The Drag" and covers of Bo Diddley ("Diddy Wah") and yes, Fred Neil ("The Bag I'm In")... Is this as good as it should be? Nope - it's BETTER. Just get it and stop waffling. RECOMMENDED and destined for a few P-Rex staffer's Top Ten of 2012 lists to be sure. Fuckin-A.