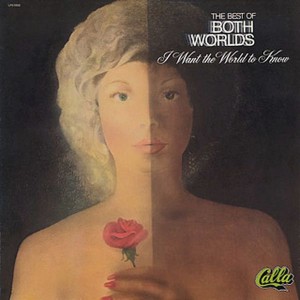 CONDITION NOTE - RECORDS ARE STILL SEALED AND MINT, BUT JACKETS ARE VG+ WITH SOME MINOR CONDITION ISSUES

"Short-lived Washington, D.C. based soul and funk outfit fronted by singer Winfield Parker. Prior to The Best of Both Worlds, Parker had accumulated a lengthy list of credentials as a sideman and as a solo act recording singles for a wide array of labels including Arctic, GSF, and Spring.  In the mid-’70s he hooked up with drummer Ralph Fisher who had previously been in one of Parker’s touring bands.

The band eventually attracted the attention of Washington, D.C. based promoter Clayton Roberts.  Roberts in turn helped the band get signed by Nate McCalla’s New York-base Calla Records. Co-produced by Roberts and Al Johnson, 1975’s “I Want the World To Know” offered up a decent mixture of “love man” ballads (‘I Want the World To Know‘), James brown-styled funk numbers (‘Broad Jumping‘), and more commercial funk (‘50 – 50‘).  To be totally objective, nothing here was particularly original, or awe inspiring, but Parker had a nice  voice that proved quite impressive on the up-tempo material and occasionally reminded me of Robert Cray (‘invisible Flowers‘).  Showcasing the ensemble’s tight playing, highlights included ‘Invisible Flowers’, the blazing ‘50-50‘ and the the funky ‘Mama Bakes Biscuits‘."
-http://www.funkmysoul.gr