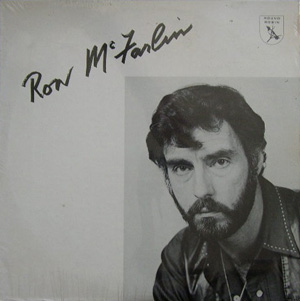 Private messed up dude, McFarlin rules a certain small sector of crazy guys in LA during the disco era. He lived the degenerate, bar fight, floozy pickup, dirty life he sings about on his three records, which are uneven but have a wasted song poem quality. Recommended.

Burnt, boozy sound; peculiar sense of rhythm; downer lyrics that don’t always make sense, but I like Ron McFarlin a lot and I like what he stands for. He sort of embodies the Hollywood I know. He wants to be a star, or at least a working songwriter. He wears his ambitions on his sleeve, clearly and poignantly, and that’s his appeal — guts and glory in the face of overwhelming odds, tempered with a knowing pessimism. In almost every song, you can hear two opposing forces — the longing for fame and fortune and the nagging sense that it’s not going to happen. His records are full of this sort of simple poetry, backed by a band who may or may not have any personal investment in the product, but sung by someone who sounds like he’s actually been there.

I’m not a fan of labels like and “real people” and “outsider music.” They are descriptive and useful, but they’re also lazy and marketing driven, and stuff complex artists into simple little boxes. That said, those terms were created to describe the weird sounds of people like Ron McFarlin.
-Douglas McGowen