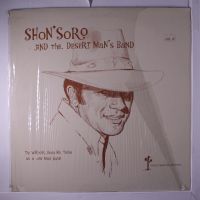 LPs have some slight dishing from storage but DNAP on sensitive set-up. These were sealed but opened to check.

In the mid 70s R. Barry Knox, aka Shon'Soro, settled in Quartz Hill, a little desert town between Los Angeles and Bakersfield, and with a TEAC 4-track, mixer, reverb unit, and a couple mics, he recorded two lps at his home studio. He released them in '78 and '80 on his own label Desert Morning Records. Having a flair for marketing, he made balloons, t-shirts, hats, and bumper stickers ("Have you heard a SHON SORO song today?") Despite being presented as a band, it was just him, a one man band. He filled out these simple songs of him singing and playing 6-string acoustic guitar with a harmonica, tambourine, and a snare drum. The sound evokes 50's music - the folk and blues music that both created rock and roll and changed from its influence. But, focusing in a bit, I hear cowboy songs, folk ballads, his own but sharing traditional genre content - sadness, hope, western fantasy: "Who's that woman coming in to my room?" or "Anytime, Big Mama" and sometimes a party vibe - "I Love to Boogie". Today, his risqué romanticism almost comes off as sensitive and emotional. These records are full of songs by a vibrant heart that's taken some punches and sings about the ups and downs. Of course, god is in the house -"God, He Is The One". Belief seems to hold things together, to keep him from going off the tracks. These records are great. Don't go looking for more like these, they don't exist.