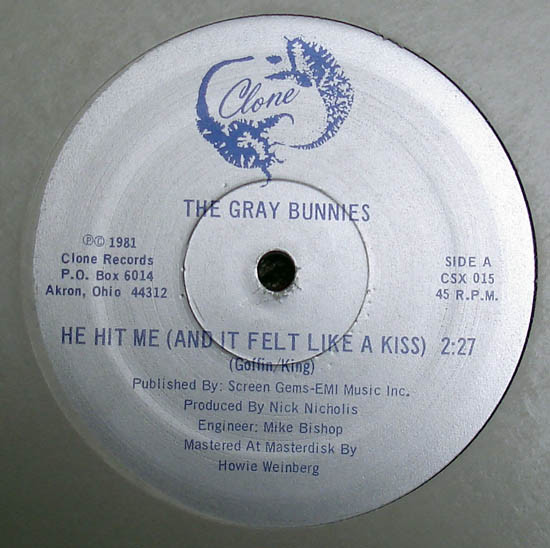 LP - The Gray Bunnies - He Hit Me (And It Felt Like A Kiss (Orig. on Clone Records)

This is the one-and-only foray into the realm of 12" dance singles proved to be Clone's last release. Not because it's a bad record, but because the label founder had familial responsibilites to attend to that the label was not supporting fully. Unfortunately, the record business is only life-supporting for a lucky few. On Clone No. 15, you should come for the cover of the Spector-produced Crystals hit "He Hit Me (And It Felt Like A Kiss)" and stay for the hyper-original B-side, "Cigarette". "He Hit Me" was super controversial upon it's release in 1962, surprise surprise. The Gray Bunnies stay fairly true to the OG version, just waving it up a little and making it more dance floor friendly. Over a decade before Hole would do their version on MTV Unplugged, no less. It's good, but the J-A-M on this vinyl sandwich is the flip. "Cigarette" is a super repetitive, minimal, Disco Not Disco rug cutter of a hypnotic leftfield jam with just one lyric, "Cigarette", which sounds like it's being sung by Kid Congo. Take this big single to your next 80s night spin gig and blow some minds. It, like all the best 45rpm records, sounds AMAZING at 33, therefore it comes very highly recommended.