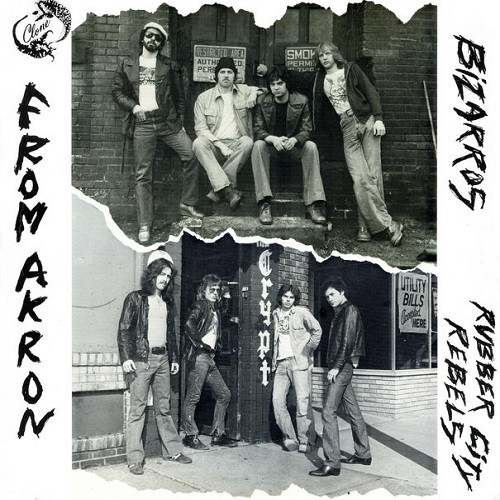 Sealed original pressing. All copies have a slight storage warp, but are guaranteed to play.

Clevo's Rubber City Rebels are quite possibly the toughest band on the Clone roster, only to be rivaled by the mighty Bizarros themselves, which of course makes the pairing for this split LP all that much sweeter. Nearly every RCR cut would sonically sit nicely somewhere on the mindblowing "Bonehead Crunchers: Loud 'n' Heavy Proto-Punk Obscurities From The USA, 1969-1977" compilation. In fact, any cut from this split would have sat nicely on said compilation were it not for the fact that RCR did eventually achieve a modicum of success and recognition a few years later with their first LP on Capitol in 1980. Rewinding back to '77, the year this record came out on Clone, Rubber City Rebels were raw and ready to punk rock 'n roll your face off, or in the least eat your children (there's actually a song about it!). The Bizarros' side kicks things off with updated versions of the first two killer cuts from their debut 7", Lady Doubonette EP, heading off into 3 damn good new ones. This material falls right in between the Lady Doubonette EP and the "Laser Boys" single that followed it. Dudes have thicker chops and more punch. You're going to get remnants of the 70's New York punk sound found on their debut with a healthy dose of the tougher territory, found the following year on the "Laser Boys" 45, which is what makes this such a damn fine complement to the Rubber City Rebels' side. We'd be amiss to not include this fine review by Robert Christgau of the Village Voice that the Bizarros/Clone themselves use to describe this essential split LP:

"There's been a Lou Reed enclave around Cleveland since the late-Velvets days, and recently it's begun to produce musicians; maybe the real reason the Dead Boys left for New York was to avoid comparison with bands as smart as Devo and Pere Ubu. Even so, a self-produced album showcasing ten good songs is a pleasant shock. The Bizarros' deliberate discordances (including viola, lest we forget John Cale) are carried forward on surefire junk-rock riffs; mastermind Nick Nicholis has the hang of Lou's deadpan songspeech, although some of his mannerisms are otiose and the promising lyrics aren't worked as fine as they must be to sound natural. The stoopider approach of the Rubber City Rebels - "Gotta get a brain job/Gotta get it now/Gotta get a brain job/But I don't know how" - proves more foolproof. Alice Cooper sang about dead babies, these guys claim to eat them. The album seems to be in mono, with sound presence worthy of Andy Warhol, but it hasn't quit on me yet."