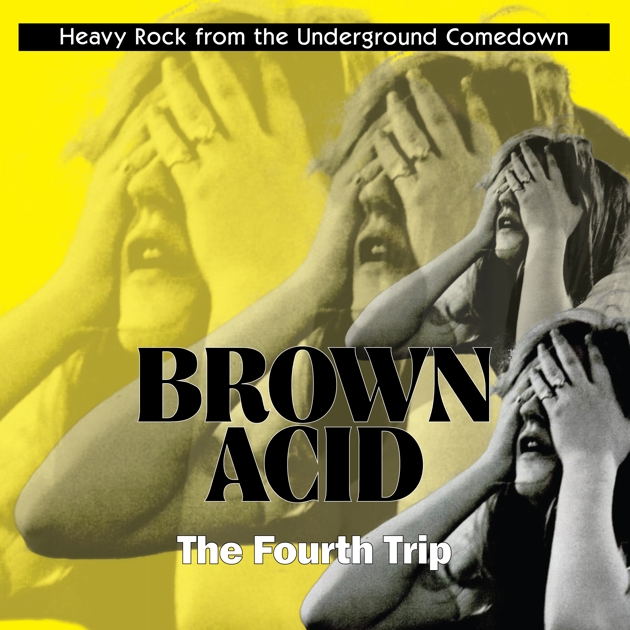 Check out the first song by Kanaan "Leave It" on Brooklyn Vegan!

“If you thought we were getting close to the end of the Brown Acid series with our last Trip, you were dead wrong…we’re only just getting rolling. The well of privately released hard rock, heavy psych, and proto-metal 45s is deep and we are nowhere near tapped out. Most of these records were barely released and never properly distributed so they ain’t easy to find, but they’re out there if you’re willing to dig…and we aren’t afraid to get our hands dirty. Hard calluses have formed from handling the shovel and we’ve sifted through a lot of dirt, but we’ve dug up another ten tremendous records to share with all the heavy heads out there. This volume brings together eight insanely rare and skull-crushingly heavy 45s as well as two previously unreleased bangers.

You may remember the Zekes’ jaw dropper “Box” from the First Trip. If you don’t, you better go back and refresh your memory, you stoner. That song rips! And so does this previously unheard recording we’ve legally obtained from the Beverly Hills Records vaults. “Comin Back” is the longest tune we’ve yet to include on this series and it’s a full-on rager! The only surviving copy of this recording came to us on the original 1/4” master tape from Hollywood’s long-defunct Demars & Duffy Music. We did our best to preserve the recording and we think you’ll appreciate the rawness.

There have been numerous groups named Bad Axe over the years, but the one you hear here is the baddest. This five-piece fresh outta high school kicked out this jam (and a few others) in a Chicago studio in 1973 just for the hell of it. As a garage band, they were previously named The Burlington Express and they went on to be known as Bitch, but these dudes hit their stride as Bad Axe and “Coachman” is their crowning achievement. It went completely unreleased until 2014 when Permanent Records issued it and “Poor Man, Run” as a limited edition 45 with a killer picture sleeve. It’s long out-of-print and only obtainable now on Brown Acid.

The rest of the records included on this volume vary in rarity, but at least two of them were virtually unknown until we discovered them. You’ll win the lottery before you find copies of all of the original 45s in even the best record stores. Many of the records included in this volume are owned only by the members of the bands and some of the band members don’t even have personal copies.  Such a bummer.

Anyhow, plug in, turn up, and freak out…this is what RocknRoll is all about.

Stone Garden – Oceans Inside Me

Headstones – Carry Me On [BUY THE UNPLAYED ORIGINAL 7"!]