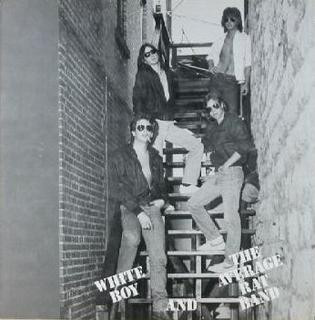 This is a perfect example of the "don't judge a band by their name" rule of record collecting. One would be sorely mistaken to think that this record is lame because of the band name. Not all great bands are blessed with the ability to name their bands appropriately. These guys obviously did not possess that ability, or they just didn't care, which is more likely. Anyhow, this is a quintessential Acid Archives rarity, that's actually worth they outrageous sums original copies go for. Here's the description from the Acid Archives:

"This is stretching the limits of the Archives here -- it's an 80s album and sounds much closer to the kind of post-punk hard rock that got college airplay in the late 80s than it does like anything else reviewed on this website. That said, it's speedy not-quite-metal hard rock with a pulverizing distortion sound (to call it "fuzz guitar" is to understate it by a mile). One song is acoustic, but mostly this is just an in-your-face blitzkrieg, and it's really great. [AM]

That's right, this White Boy and The Average Rat Band LP is an in-your-face proto-metal blitzkrieg from Baltimore, 1979 and it'll totally appeal to fans of the greatness of groups like Sabbath and Motorhead. It'll also appeal to fans of the production style of the original KBD records, but it's more metal than any of that stuff which is ironic considering Killed By Death is a Motorhead song. Weird. Highly recommended and to be considered for reissue of the year as well.