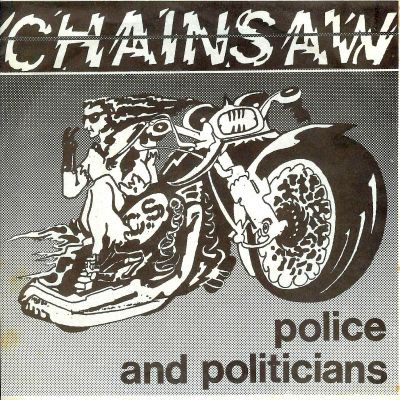 SKU:
$14.99
$14.99
Unavailable
per item
There were two bands of the NWOBHM with the CHAINSAW moniker, one from Yorkshire (who released two 7″s, with a fairly melodic style) and this one here, who also released a so-so 12″EP and a five song demo tape.
“Police and Politicians” and “Hole in the Ground” are interesting rock numbers. Not so much Metal and the latter with a hint of Punk Rock thrown in. But they both profit from a relatively powerful sound and pretty atypical vocals. This might be not earth shattering, but it’s a nice 7″ that should not be overlooked.

Summer is almost over here – in fact, it never really happened. Real shit weather here in the Shire. I’m tempted to write a few words about the UK riots from last week, especially with this 7″ here, but I’ll spare myself and you the time. What some people are trying to see as a social and political upheaval is, at least that’s how it appears to me, nothing but the ugly face of boredom, brutalization and unchained consumerism rearing its ugly head. Sure, the mass unemployment of youth, racism etc. etc. are deplorable facts, but what has that got to do with these scenes of mindless destruction and violence televised once again? Nothing. It’s but a nasty reminiscence of the 70s and 80s.