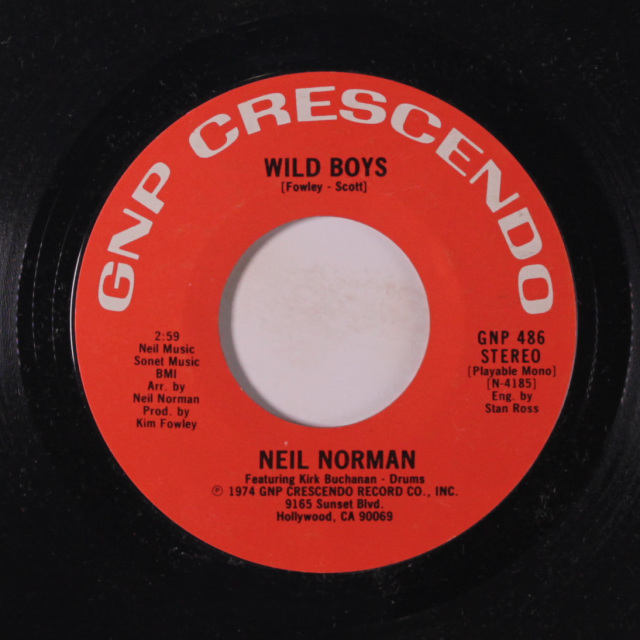 Garage and mutant rock junkies take note cuz we've scored ANOTHER KILLER BATCH OF ORIGINAL DEADSTOCK SINGLES, this time from LA's Neil Norman. And trust us yer gonna need to grab both "Phaser Laser b/w With You My Love" and "Wild Boys b/w Tits From Mars" ASAP.  But for a little backstory of Mr Norman, Pure Pop UK has us covered -

"The son of GNP Crescendo founder, Gene Norman, Neil was given proverbial free reign over the empire that Pushin’ Too Hard built. And what’s the first thing he goes and does, but pal & partner up with Kim Fowley! Boy oh boy…kids today!

After recording his first single, Phaser Laser, an epic of damaged Alice Cooper rock/horror and suggested violence, Neil decided to give the king of Canter’s Deli a try at penning some tunes. As always, Kim wrote about what he knew. Fresh off the heels of recording as Jimmy Jukebox, Kim fired back with ‘Wild Boys’ - a fairly typical, Fowley-esque, grope-trope of perpetually erect males wreaking havoc across a vulnerable, all-female city-scape that is rocketed to the stratosphere via Neil’s fine, Punky, lead fuzz break.

And it’s in the upper atmosphere we stay for the instrumental b-side, Tits From Mars. Stinking all over of residual Barrett fumes or possibly presaging the coming of Simply Saucer, ‘Tits’ is an oppressive, Mandrax messterpiece. Instellar Overdive’ meets The Nazz Are Blue according to one learned scholar of such things." - purepop1uk.blogpsot.com

And did we mention that "Wild Boys" was that song you counldn't get outta yer head from Bonehead Crunchers Vol 1? And that it was written by Kim Fowley? Yep it's that earworming sleazy track, and you probably never thought you'd be able to see it in person!!!!  AND HOLY HELL it only gets better when you flip the 45 over and crank up the amphetamine sci-fi encrusted "Tits From Mars."  Both tracks are trashy garage at its finest and most sick!  So for you Kim Fowley garbage pop crazies, Pebbles addicts, glammed out / fuzzed up RnR lovers and fans of obscuro 60s rock in general, you need "Wild Boys" now. And this is the only time you're gonna get to buy this one new!!!  RECOMMENDED LIKE A MOTHER!!!!!!!!!!