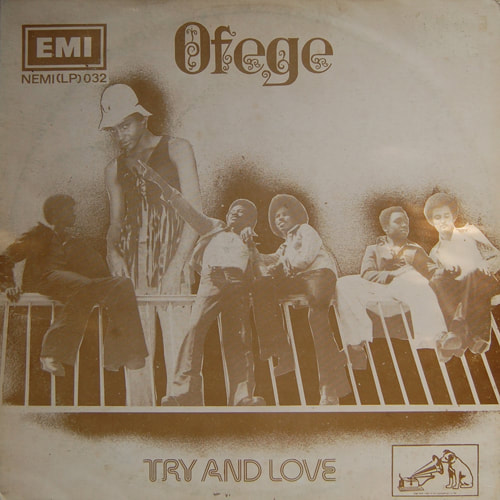 The ultimate in West African psychedelic funk. The first of their kind, Ofege was a band of college students from St. Gregory’s College, in Lagos, Nigeria. I read somewhere that they were “influenced by Nigerian bands BLO, The Funkees and the Black Company as well as overseas bands like Led Zeppelin and Santana” but I’m not sure if that actually begins to approximate their sound. I suppose the closest kin they had were BLO, but Ofege were a bit more raw, a bit more amateur (in a good way). Like Shorty and The Jr. Kools in comparison to Kool and the Gang (or something like that.

Whatever the case, Ofege succeeded in creating a debut album drenched with fuzz guitar, plaintive, wailing vocals and a backbeat as influenced by James Brown as it is by Fela Kuti. It’s a unique, raw, beautiful take on the psychedelic sound.

Though they recorded a few more albums in the mid to late 70s which are ostensibly “funkier” than their debut, none possess the charm of Try and Love. Check “Gbe Me Lo,” the sole instrumental on the album and the reason that crusty psych geezers shelled out four figures for this album before the days of eBay.