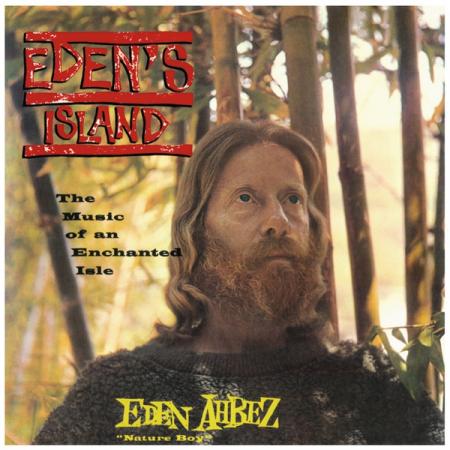 Fantome Phonôgraphique presents a reissue of Eden Ahbez's Eden's Island: The Music Of An Enchanted Isle, originally issued in 1960. Though he was originally from Brooklyn and raised by adoptive parents in rural Kansas,George Alexander Aberle, aka eden ahbez, is about as California as they come. He was discovered in the 1940s while working in one of Los Angeles' earliest raw vegetarian restaurants and was known throughout the '50s and '60s for being spotted on the streets of L.A. in full white robe, sandals, and beard, and legendarily camping underneath the first L in the Hollywood sign. After writing numerous hits for jazz and pop singers, including the iconic "Nature Boy" made famous by Nat King Cole in 1948, ahbez (who spelled his name with lower case lettering because he deemed only God and Infinity worthy of capitalization) recorded his only long playing record, Eden's Island: The Music Of An Enchanted Isle in 1960. A combination of exotica arrangements and beat era poetry, the album sold poorly at the time but has since become regarded as an exotica classic that transcends the trappings of the genre. Absolutely essential L.A. weirdness from one of the original L.A. weirdos.