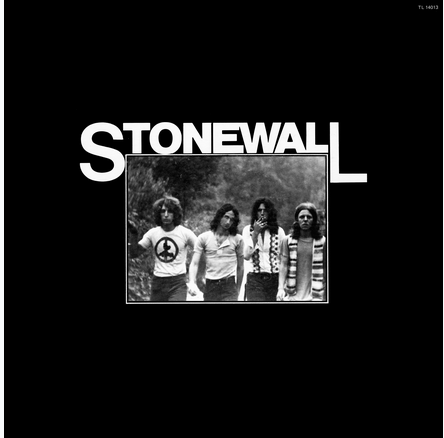 "So you're addicted to hard rock from 1972 and getting tired of LPs that don't take you for the full ride. You check out tons of 'em. Stonewall? Hmmm... only the most potent and rare stuff can get you off nowadays. Kicks intense enough to remind you why you got into it in the first place. Jams you can't wait to lay on your friends so uncontrollably alive you know it's gonna wipe 'em out. Yeah... you really need Stonewall. It's ritual time.

I hear people all over the world saying Stonewall is a 'Holy Grail'. I agree. 'Holy Grail' status for an LP requires the most extreme and exciting combination of quality and rarity. That's not all. It has to have mystery. It has to reek of humanity. There can be no other LP that beats it at its game. Top dog. It has to be a mindfuck capable of destroying anybody who hears it, including those who have previously only experienced the usual killer classics. Finding a copy must come as close to impossible as possible and remain that way even after everybody knows about it. As an original pressing, Stonewall fulfills all of the 'Holy Grail' requirements and I am jacked that a legitimate reissue finally happens some 30 odd years after it first blew me away!" - Paul Major

"Stonewall was a phenomenal hard rock band that almost no one heard in real time. For years, there was no story at all, only one very blurry picture, and the music was available only to the fanatical.

The sounds, though, are extraordinary, and not just for a “rare” record. Stonewall’s combination of confidence and furious in-the-room energy means they sound ALIVE like the very best hard rock. That a band this fiery and original never got to make a conventional studio record is baffling, but what we have might be even better - the sound of a great band in it’s raw form, bursting at the seams with powerand ideas, live in the room. Like the very best private press LP’s, Stonewall effortlessly inhabits a space nobody else thought to get to. Nobody got to sand off Stonewall's rough edges, so we get to hear what the luckiest denizens of forgotten New York bars would have heard. Even the drum solo is thrilling, perhaps the only time that’s ever been true on a recording. This music looks backwards to psychedelica, forwards to punk, and straight into the stoned eyes of 1972. A producer or record company would have tried to mold them, and they would almost certainly have lost some of the innocence that makes this so fresh seeming almost 50 years later." - Geoffrey Weiss