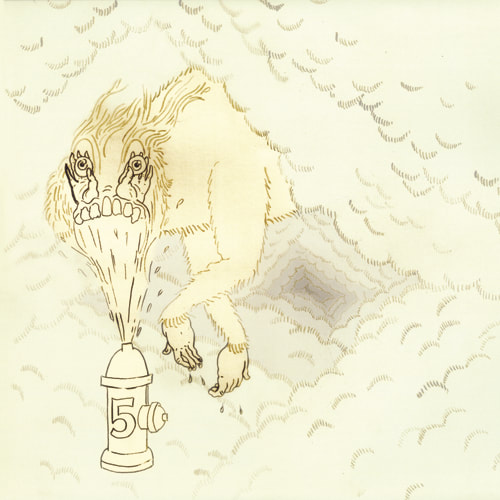 The denizens of Castle Face are not afraid to get their shins dirty mucking around in the stacks and they’re well aware of an out-of-press gap of Oh Sees releases right before 2006 when they started the label with Sucks Blood. They’re rectifying that and first among these is The Cool Death of Island Raiders, a particularly dusty gem that merits another look.  Kicking off the record with what should have been the hit of the summer that year but for the hard C in the title, “The Gilded Cunt” seems to clearly preface Oh Sees’ later psych-skewed pop sensibilities. Chirping birds, gently lapping tempos and the nascent harmonization of Bridgid Dawson and John Dwyer detail a definitive highlight of their early quiet period of the band. The tree hangs heavy with Patrick Mullins’ handiwork, manning the musical saw, drums, and an assortment of home made electronics. It seemed a bit radical to be so quiet about it, but the tunes are total ear-worms among the assorted drones, cut-up bits of tape noise, and mellow front porch-vibes, and the whole thing hangs together in a lovely hand-made way, helped in no small part by Dave Sitek’s production (he would later work on Master’s Bedroom as well). “We flew Brigid out a fresh woman and literally sent her home on a plane with a trash bag of her clothes” says Dwyer. Evidently the whole record was accidentally erased at some point right around when the photo on the back of the jacket was taken, which makes it all the more remarkable that the result sounds so casually and confidently careworn.