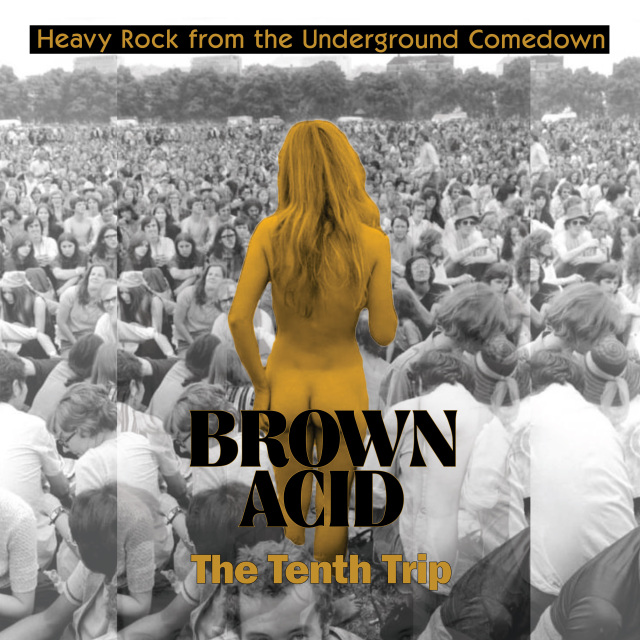 Here we are, arriving at the tenth edition of Brown Acid in just half as many years! As always, we packed in the highest highs of the dankest hard rock, heavy psych, and proto-metal tracks previously lost to the sands of time. Like we’ve done throughout this series, all of these tracks were painstakingly licensed legitimately and the artists were paid. It’s hard to believe we’re already up to 10 volumes of this lysergic Neanderthal wail, but the long-lost jams just keep-a-coming like Texas crude to fuel your rock ’n’ roll engine and melt your metal mind.

This Trip kicks off with the Hammer of the Gods howl of “Plastic Thunder” by Bitter Creek. The Atlanta, GA quintet’s lone single from 1970 on Mark IV Records is rated #6 of the Top 50 Heaviest Songs Before Black Sabbath by GuitarWorld Magazine. You can hear why in the ominous riff and larynx-ravaging chorus that merges the deepest of Deep Purple sludge with The Who’s rollicking psychedelia.

Not much is known about The Brood’s 1969 bluesy paean to dirtbag weed consumption “The Roach” on the It’s A Lemon imprint, except that it’s a big, growling rocker with a crazed in-the-round blowout of wailing guitar solos, screeching organ blasts, wildly overlapping vocals and drum rolls for days.

Nova Scotia, Canada sextet Brothers and One’s double-entendre laden single “Hard On Me” certainly pushes the boundaries of what would be acceptable at the time (especially amongst their ever-polite Canadian brethren.) Their lone full length was released in 1970 on short-lived Audat label, the group featuring two sets of brothers (hence the name) recorded the album while all members were between age 13-18-years-old. This glam-influenced single was privately released on the band’s own label nearly 4 years later.

Louisville, KY quartet Conception’s excellent revision of Blue Cheer’s “Babylon” (1969, Perfection Records) adds heavy phaser effect on the guitar and a more driving rhythm to make the song entirely their own. Lead guitar and high harmony vocals by Charlie Day (not to be confused with the Sunny Philadelphian actor) are assertive and commanding as he implores listeners onward to hallucinagenic nirvana.

Not exactly a typically psychedelic band name for the era, but First State Bank’s “Mr. Sun” (1970, Music Mill) pays hearty dividends of boogie bustle. The Central Texas band led by guitarist/vocalist Randy Nunnally released only 3 singles in its career from 1970-1976. For those keeping score at home, their song “Before You Leave” was featured on The Third Trip back in 2016. “Mr. Sun” is the heavy B-Side to “Coming Home To You.”

Clearly inspired by Jimi Hendrix, Tucson quartet Frozen Sun topped the local charts in 1969 with this barnstorming rocker “Electric Soul” (Capt. Zoomer Records.) The song is replete with guitarist/vocalist (with big Hendrix hair) Ron Ryan’s spoken interlude, “Well have you been electrically stoned? You know, living in the danger zone?” We say yes.

Ralph Williams and the Wright Brothers took flight with “Never Again” on Hour Glass Records in 1972, and apparently never landed after this 45 with “Dark Street” on the A-side. The serpentine riff and sexually-charged backing vocal grunts drive this archetypal tale of a young man’s chemical odyssey… or, should we say, trip?

Sounds Synonymous pretty much epitomized heavy fuzz from Michigan with their 1969 single “Tension” on the Wall Productions label. The Hendrix “Fire” meets Arthur Brown’s “Fire” track lunges and lurches with glee throughout its 3-minutes and change of unbridled crunch. Tabernash’s “Head Collect” (1972) is the suburban Denver quartet’s only release following the name change from The Contents Are and a move from Davenport, IA. This more stately psych-rock chune features Byrds-like harmonies, twangy reverse-looped guitar soloing and Keith Moon-esque drumming that should’ve made it a chart-topper, but we all know there’s no justice in rock’n’roll.

The Tenth Trip closes, appropriately, with the “War Pigs” reminiscent fuzz of New Orleans quartet The Rubber Memory’s 1970 tune “All Together.” The band self-released only 110 copies of their lone album, making it an incredibly sought-after rarity for decades. Alongside a limited edition reissue in 2000, the group reformed for a one-off show before quickly bouncing back into our collective cosmic consciousness.