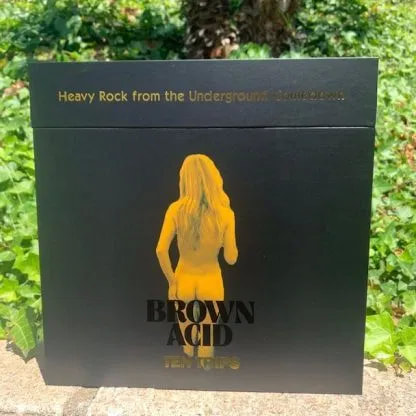 Having released 10 editions of the Brown Acid series in just half as many years, we’re still only at the tip of the iceberg of brilliant long-lost, rare, and unreleased hard rock, heavy psych, and proto-metal tracks from the 60s-70s. With each new edition, we unearth even more incredible bangers that somehow eluded popularity up until now. For every classic rock mainstay like Black Sabbath and Grand Funk Railroad, there’s hundreds of great bands who, for a variety of reasons, were previously lost to the sands of time.

They were different times between 1968-1979. The gatekeepers had a much tighter grip on which bands got airplay, whose records were available in shops and what sounds were considered palatable to nightclub audiences. Many of these bands barely made it out of the garage, self-releasing 45s as demo tracks for record executives or to beg club owners for a gig. Others have had fleeting brushes with fame, while a few recordings here have spent the past half-Century gathering dust in a closet before being discovered by Brown Acid archivists.

Couple those challenges with the rockcritstocracy’s enduring disdain for hard rock, and the exhaustively thorough archives of legendary compilation series like Nuggets, Pebbles and their ilk having virtually ignored this kind of lysergic Neanderthal wail while exhausting the mines of early garage rock and proto-punk. So, while certain types of unsung heroes have gotten their due, before Brown Acid, only the most extremely dedicated and passionate record collectors had the stamina and prowess to hunt down long forgotten pre-metal wonders in dusty record bins — often hoarding them in private collections, or selling at ridiculous collector’s prices.

Of course, the Internet music revolution has made it possible to find extremely rare music with great ease. But even with such vast archives to draw from, few have organized such a nonstop barrage of heavy-hitting greats in the format they were meant to be heard: on vinyl. If you’re holding this box in your own collection, clearly you’re hooked on this mind-melting series dubbed Heavy Rock From The Underground Comedown.

This long, strange Trip began in the Fall of 2015 with the inaugural edition launching raging hellfire from Raw Meat, Zekes, Zebra and more. The Second Trip followed a little over half a year later on 4/20/16, showcasing later repeat offenders Ash and Spiny Normen among other crushing tunes. From that point on, new installments have been released like clockwork on 4/20 and Halloween every year. The tunes range from Sabbath plod to Hendrix squall, MC5 bluster to psychedelic heavy prog and everything in between that one might’ve heard blasting out of a tricked out van in the era.

Lance Barresi, co-owner of L.A.-cum-Chicago retailer Permanent Records and co-creator of Brown Acid has shown incredible persistence in tracking down a stellar collection of rarities that continues to grow and open up new avenues of discovery. Partnered with Daniel Hall of RidingEasy Records, the two have assembled an ever-growing library of songs that’s hard to believe have remained unheard for so long. As we’ve done throughout this series, all of the tracks were painstakingly licensed legitimately and the artists were paid. Because it’s the right thing to do.

While this box set nicely bookends the first 10 volumes, the Brown Acid trip will continue on, hopefully for at least another 10 volumes in order to amass the greatest collection of dank, subterranean, wild-eyed and hairy rock’n’roll in the world. For now, sit back, crack a cold one and dig in to over 100 tracks of mind blowing cosmic crunch.