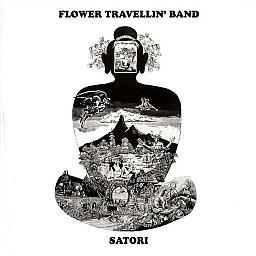 "Satori" is the crowning achievement of The Flower Travellin' Band's pretty stellar oeuvre (and quite possibly the greatest Japanese rock and roll album, well - EVER), and since it just got reissued by Phoenix Records (again), we figured we'd give it the "star-treatment" it so deserves!

STOP. If you haven't already purchased this record, DO IT NOW. We'll wait.... OK - got it? Let's begin. "Satori" is a full-tilt RAGING demon of a record that ebbs and swells like a psych record, but ROCKS as hard (if not harder) than any metal/hard rock record from 1971. Think about it - by 1971, Sabbath only had two albums out and this record SMOKES both "Black Sabbath" and "Paranoid". Might sound blasphemous, but it's fucking true. Up to this point The Flower Travellin' Band's output had been rooted in the blues-based traditions of bands like Led Zeppelin and Deep Purple, but with "Satori" (their second album proper) they completely obliterate any comparisons to The Zep or their mudsharkin' contemporaries. Explosions of freaked out, Eastern-tinged guitar soloing that erupt from the tunes like molten lava, while the rhythm section stomps and writhes like a two-hearted monster from the gates of Hades. It's muscular, it's sweaty, and hell - it's fucking SCARY. Comprised of five suites ("Satori" Pt's 1-5) that are mostly instrumental, with vocalist "Joe"s minimal vocal stylings - dropping in a few verses, wails and "Whoah-oh-oh-ohs" here and there with a full-throated roar that sounds like a call towards Armageddon! (Do you get the feeling we like this one, yet?) Ranked at #1 by Julian Cope in his "Japrocksampler" book's Top Fifty albums, so if that's not an endorsement we don't know what is! It's also TOTALLY ESSENTIAL in our books as well, so what are you waiting for? FUCKING GET IT.