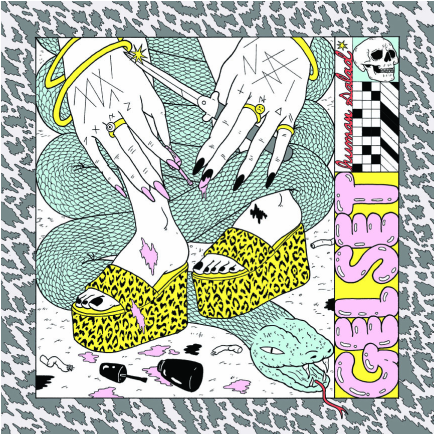 "For something so reliant on modernity, Gel Set’s 'Human Salad' screams something primal, as likely to plead the fifth as plead for companionship. Who’s guilty and who’s complicit, you or me? Something slithers out from the South Side of Chicago, like that beast towards Bethlehem, its roving eye shining light on perennial abandonment. “If you were here, I’d have nothing to dream of. If you were here, I wouldn’t believe you,” Laura Callier incants on album opener “Phantom's Ring.” Who is the ever-present “you”? Me? The listener is made conspirator, an added ingredient to Gel Set’s human salad.

There’s something uncannily nerve-wracking about the phrase “human salad,” though, upon inspection, it is not only an appropriate signifier, but an inviting one. Let’s digress, just for a second. A salad gets its strength from variety – the best salad-maker combines colors and tastes to surprise and satisfy the salad-eater. Similarly, Gel Set combines the human experience from Spanish transgression (“Mi Puta”) to a sensorial game of dozens (“Double Vision”). Unexpected? Yes. Undesirable? No. Surprisingly, as the listener immerses him or herself in Laura Callier’s one voice, he or she is made aware of different narrators – how can you make a human salad with only one human, after all? Trust me, we tried.

Tying the record together is Gel Set’s rhythmic mastery – ultimately, 'Human Salad' is easy to dance to. As serious and all-encompassing as the lyrics are, the background music is, to put it simply, fun. This is darkwave at its artistic peak, dispersed in common experience, all the while retaining nuanced affectation and hip-moving backing tracks. This salad shakes!"
-Moniker