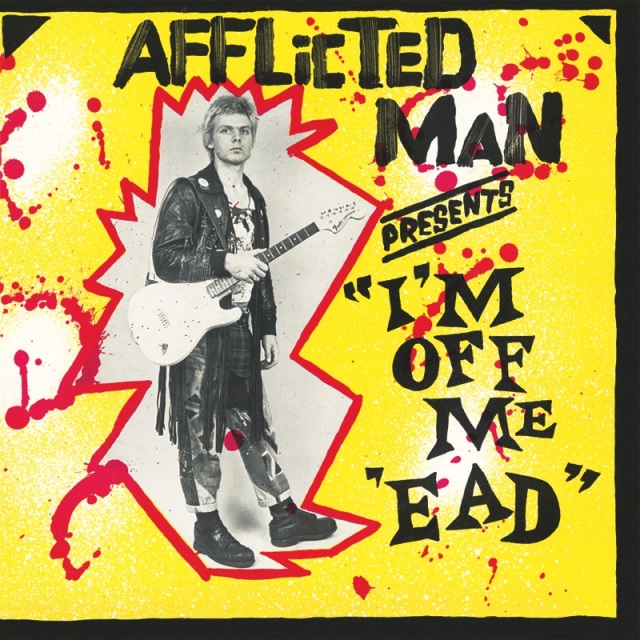 "I'm Off Me 'Ead" is DIY psych punk (or "Hippy Punk" as Steve Hall calls it) at it's finest, but don't just take my word for it.  Heavyweight record aficionados such as Henry Rollins, Byron Coley, Tom Lax, Doug Mosurock, and Geoffrey Weiss are BIG fans...

The idiosyncratic music critic, Byron Coley (Forced Exposure, Bull Tongue, Spin, Wire, Arthur), really lays it out there:  "Steve Hall's Afflicted (Man) project was one of the greatest mystery wobbles to come out of the Brit DIY explosion. Trying to figure out what the hell these records were about took years to unravel. We even thought there might be a Nurse With Wound connection when United Dairies released the Afflicted Man's Musica Box LP. We were stupid, but can you blame us?  The slurred psych blues of I'm Off Me 'Ead were so unlike anything else going on at the time, it almost seemed like the whole thing had to be a put-on of some kind. There had been those earlier records, sure, this one felt way different. The concept of UK stoner-punks had existed for a few years, but their output had tended towards the arty end of things before this. There's a latent brutality to Im' Off that truly lashed our feeble minds. But maybe that's only because L.A. was awash in very good acid right about then. Still, it remains extremely  difficult to place this music inside the contextual history of what was going on then. Jesus, I would have loved to have caught a gig or two. Unimaginable. I bought I'm Off Me 'Ead at the old Vinyl Fetish store on Melrose in '81, same year I finally managed to snag a copy of Randy Holden's
Population II, and they were both records I'd play to anyone who dropped by our pad in Santa Monica for a listening session. The utterly fucked-up-ness of both guitarists never failed to astonish anyone who wasn't too wasted to acknowledge what they were hearing. And so it is."

Tom Lax's Siltblog posted this: "Afflicted Man's style could best described at stock-in-trade Brit DIY w/an almost Street Level sort've quality to it…Too freaked out for punks, too punked out for freaks... must've felt like a rusty safety pin stuck straight through the heart of whatever DIY fanbase Hall had acquired. And for all the Pink Fairies or Hawkwind type's that mighta come across it, it was too primitive & animalistic for their quid."

Geoffrey Weiss' is one of the most venerable record collectors in the world.  He summed it up like this: "Deliriously incompetent, frighteningly direct, and bafflingly out-of-time, there is no doubt that Steve Hall is in touch here with something most of us can't get near. "

We here at Permanent absolutely love this record and are incomprehensibly honored to be the label reissuing it on vinyl for the first time ever.  It's been fully licensed by Steve Hall himself and painstakingly remastered by the total pros at Penguin Recording in Eagle Rock.  The jacket artwork was graciously reconstituted and touched-up by Bill "Trouble In Mind" Roe.  The full-color "I'm Off Me 'Ead" inner sleeve contains a bunch of unseen Afflicted Man photos, an unpublished interview with Steve Hall and a fully authorized reprint of Chris Stigliano's article from Forced Exposure #9 (Winter 1986).